A vast career in broadcasting: Charles (Charlie) Watts has lived in Semmes for thirteen years.  He is widowed & has two children, David Watts & Suzanne Roberts, & six grandchildren. Mr. Watts pastors a small group at Seven Hills Baptist.  He enjoys his family &  is proud to serve as a council member. Lawrence Webb, a resident of Semmes for 45 years, has served on the Semmes City Council since 2012. His distinguished military service included serving overseas in the U.S. Army in South Korea from 1954-56 and then returning to the U.S., he finished his military career at the Pentagon as a staff sergeant.

Lawrence married Sherry Barnett and the two moved to Mobile, where he worked in the Mobile County Tax Assessors office first as an Assistant Court Clerk and then as the Court Clerk for the City of Prichard. In 1967, he joined the Prichard City Police Force, serving both as a patrol officer and a motorcycle escort during his tenure as a police officer. He was named Policeman of the Year for the City of Prichard in 1969. In 1971, Lawrence started a local business in Semmes, Webb Electric and Greenhouse Construction. He quickly earned the respect of local and regional nurserymen from Florida to Texas who came to depend on his skills and expertise in the construction of greenhouse structures.

A member and Deacon at Semmes First Baptist, his church activities include helping take care of the grounds and pastoral residence, completing required repairs. He also aids church elders and takes part in visitation. Lawrence has assisted with both local Boy Scout troops and served as Vice President of the Gideons International West Camp, of which he is a 25 year member. He has also served on the Board of Directors for the Mission of Hope.

A tireless public servant, Lawrence was instrumental in obtaining a large percentage of the original annexations for the incorporation of Semmes, going door to door to obtain signatures. Known in the community for his tireless work ethic and generous Christian heart, Lawrence continues to work fervently for the City of Semmes as a City Councilman. Born in Mobile, Alabama, Terry grew up in the boating/marine environment working waterfronts from Galveston, Texas to Key Largo, Florida as a commercial mariner and stevedore. As as a young adult, he began a seafaring career as Ordinary Seaman eventually becoming Master Mariner in the United States Merchant Marine engaged in commerce and transportation of goods and services in and out of the United States to ports in the Gulf of Mexico and Caribbean Sea.

He has a A.A. degree in Electronics Technology, B.A. degree in Business Administration and Computer Programming. He also holds a Federal Communications Commission Extra class license.

He is a bestselling Amazon author specializing in online research and investigations. He has self-published twelve titles.

Lee Lawshe has resided in Semmes for 44 years. He was recently selected to fulfill the remainder of Mr. Shirey’s term as councilman.

Mr. Lawshe is married to Rawleen, & they have 4 children, Lee, Jr., Marty, Connie & Eric.  Their family also includes 10 grandchildren & 6 great-grandchildren.  Mr. Lawshe continues to be self-employed as a carpenter in general construction. He enjoys spending time with family & lists hunting as one of his hobbies.  On Sunday you can generally find him at Semmes First Baptist Church.

Facebook-f Instagram
I’d like to extend a warm, Semmes welcome to our city. Whether you’re here for a quick stop on your travels, or to stay for a while, we hope Semmes feels like home. We’re glad to have you! 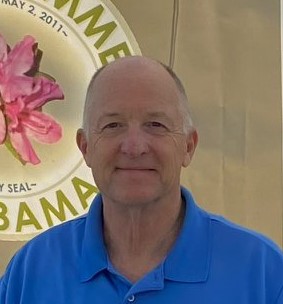